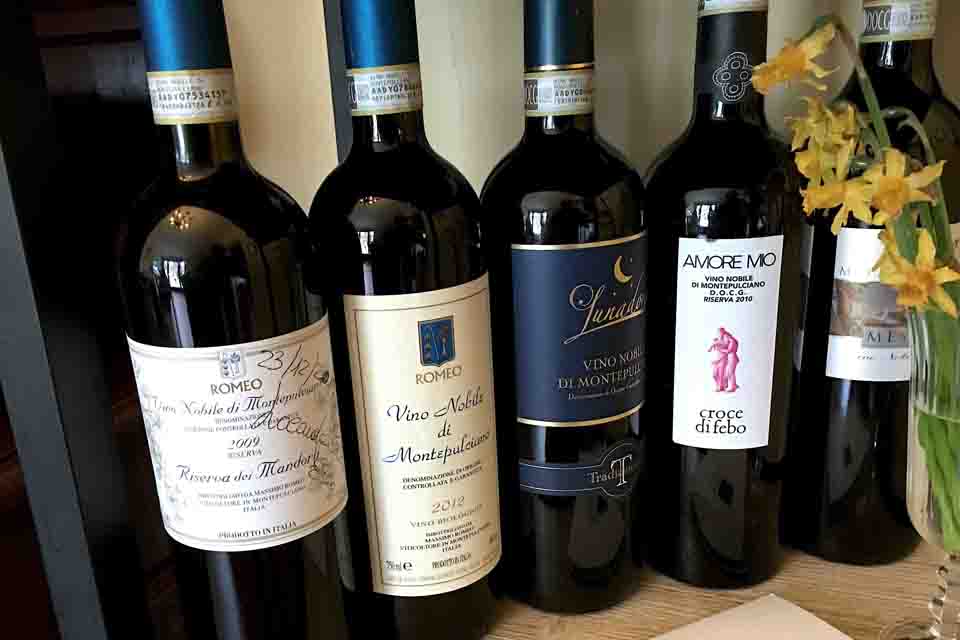 To find a definition of Vino Nobile di Montepulciano there is nothing better than referring to the words of Francesco Redi, poet and medieval naturalist of the seventeenth century, who wrote in this regard: "Montepulciano of every wine is King". Red, full-bodied and with a strong character, Montepulciano has an ancient history and has been appreciated over the centuries because of its great quality and its inimitable organoleptic characteristics.

The Nobile di Montepulciano has been produced in Tuscany since ancient times. The Etruscans already produced wine in these areas, while the first written record is to be referred to the Latin historian Livio who, in his "Stories", reports how the barbarians from Gallia were convinced to cross the Alps just after they were tasted wine here product!
The first, true reference to Montepulciano dates back to the year 789, and precisely in a document that attested the legacy of a vineyard to local ecclesiastical authorities.

Since then, Montepulciano has crossed the centuries and history, in which it was appreciated by sovereigns and nobles not only Italians but also of non-European nations; during this period moments of great notoriety alternated with others in which the wine slipped into an undeserved oblivion. But the real turning point came at the beginning of the last century when, precisely in the year 1937, the first social winery was founded, which brought together the producers of Vino Nobile di Montepulciano.

From there shortly and, precisely, in 1966, the DOC certification (Denomination of Controlled Origin) was recognized to Vino Nobile di Montepulciano, while the highest level in absolute, that is the Denomination of Controlled and Guaranteed Origin (DOCG), then it was assigned in 1980. Montepulciano was, in this regard, the first wine in Italy to achieve the prestigious DOCG certification.

The Nobile di Montepulciano is produced in the province of Siena and precisely in the territory of the municipality of Montepulciano, on hills whose altitude is between 250 and 600 meters above sea level.

Nobile di Montepulciano is made with Sangiovese (which, in Montepulciano, is known by the local name of "Prugnolo Gentile") and the Canaiolo Nero, as well as other varieties, recommended and/or authorized for the province of Siena, excluding Malvasia del Chianti. Sangiovese grape must be minimum 70%, meanwhile Canaiolo Nero, and other vines up to a maximum of 20% each; in the case of the latter, the percentage of white grape varieties must not exceed the 10% threshold.

According to the production regulations, the Vino Nobile di Montepulciano must undergo a maturation period of at least two years starting from the first January following the harvest. During this period aging can be conducted in three different ways:

Depending on the type of aging conducted, the Nobile di Montepulciano wine takes on organoleptic characteristics and, consequently, qualitative, significantly different. The "top" of quality is undoubtedly represented by the "Riserva" wine: this is a wine produced with grapes having a minimum natural alcohol content by volume of 12.5%, which is aged for a period of at least three years, of which six reserved for bottle aging.

The wine is marketed in bottles with a capacity of fewer than five liters, of the Bordeaux type, of dark glass and closed with corks. On the market you can also find "old" bottles of more than fifteen years: if a good year, in fact, Montepulciano can be aged for relatively long times, turning into a truly unique product.

The Nobile di Montepulciano has a beautiful ruby red color that, with aging, tends to take garnet reflections. The wine has a scent is intense and ethereal. The taste is balanced, intense, dry and persistent; in this harmonious complex, the notes of wood, jam and the fruits of the undergrowth can also stand out.

The minimum total alcohol content by volume is 12.5 °, for the type called "Riserva", this must be at least 13%.

We recommend serving the Nobile di Montepulciano wine at room temperature, so between 18 and 20 ° C., It is advisable to uncork the bottle at least two hours before consumption, in order to allow the wine to oxygenate and release its typical aromas, as well as allowing proper decanting. This wine, to be appreciated at best in all its qualities, should be served in large glasses with a slightly convex mouthpiece, which captures the perfumes in an optimal way.

We recommend combining The Nobile di Montepulciano with roasts and white and red meat, as well as with noble poultry and game. Its characteristics make it possible to best enhance the flavors of aged cheeses such as, for example, Pecorino or Parmigiano Reggiano. 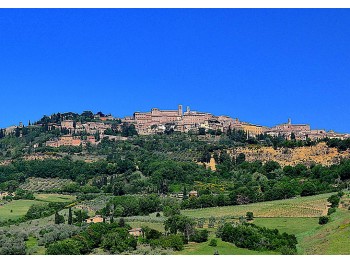 These are our wine tours to Montepulciano wine region: