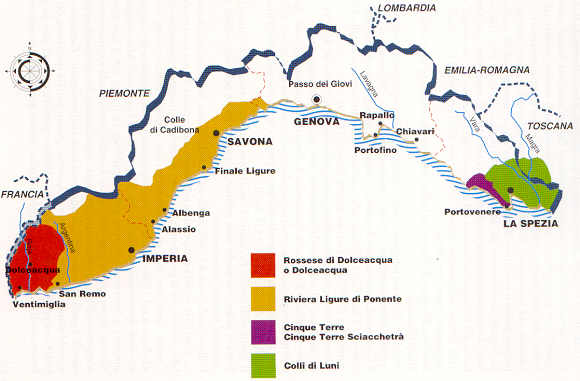 The wine fame of the Riviera di Levante (Eastern Riviera), running from Genoa to La Spezia, comes almost exclusively from the output of the Cinque Terre Doc, instituted in 1973 to protect the wine district at the end of the arc of Liguria's coast, as small as it is significant in oenological terms. In 1995 this DOC was joined by Colline di Levante on one side and Colli di Luni on the other (the latter shared, if only in three municipalities, with Tuscany) to form the widest La Spezia wine district. More recently, The Golfo del Tigullio and Valpolcevera DOCs were created, covering the wine land in the Genoa province.

LEVANTE WINE TRAIL
This route runs from Genoa to La Spezia, exploring the Riviera's five DOC zones. It passes through places so famous they need no introduction but also goes inland into rural zones of surprising beauty. It could also be described as a gastronomy route, where seafood, meat, and exceptionally tasty produce abound; one begins with the uniqueness of the regional capital city, which sums up all of Liguria's cuisine traditions, and then lingers over special accents at places which have always been influenced by nearby Emilia and Tuscany.

CINQUE TERRE
The term Cinque Terre stands for the stretch of coast ( about 6 miles as the crow flies) linking the seaside villages of Riomaggiore, Manarola, Corniglia, Vernazza, and Monterosso. Around these centers, on the sloping coastline, are terraced vineyards that cannot but arouse admiration and amazement. The wines that result (with imaginable efforts) have been praised in every epoch: they include a legendary Sciacchetrà, a rarity that is today very much imitated.

RIOMAGGIORE
With its tall, abutting houses, winding lanes, and tiny squares, this town lies between a mountainside carpeted with vineyards on one side and cliffs that drop to the sea on the other - dividing-line is the railway. Riomaggiore - the Cinque Terre easternmost town - and nearby Vernazza offer the most thrilling pictures of ancient and laborious viticulture that add prestige to the homonymous DOC. From Riomaggiore departs the Via dell'Amore, a romantic promenade high above the sea that leads to the handful of houses at Manarola, a vignerons' village overlooking a natural amphitheater of vineyards and produces gardens. Further on is Corniglia, high on a steep ledge, and even further Monterosso al Mare; these two villages lie in a basin with sandy beaches backed by the hills.

CINQUE TERRE SCIACCHETRA'
This is the Ligurian wine on everyone's lips, partly for the charm of its original place and partly for its rarity.
Sciacchetrà is made primarily from Bosco grapes (min 40%), with additions of Albarola and Vermentino (max 40%) and other local grapes. The bunches are generally dried on shaded racks in ventilated positions so that the sugary juice concentrate slowly. By law, pressing cannot be before November 1st.
The resulting wine ranges in color from golden yellow to amber and has an intense scent of passito, with hints of honey, fruits, and spices; taste varies from slightly sweet to sweet, is well-bodied and has an almond aftertaste, Alcohol:  17% at least 13.5% of which developed.
Minimum refinement is for a year, rising to three for the Reserve.
Sciacchetrà was born as a dessert wine and is excellent with traditional Ligurian pastries like Genoa's Pandolce or Canestrelli cookies, but also with delicacies like candied bitter-orange rind. It should also be tried with the stranger cheeses streaked with green mold, as well as with pecorino. 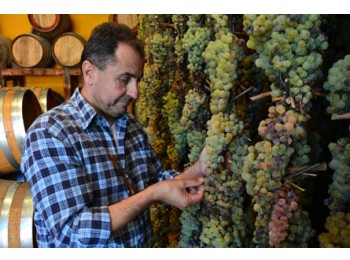